10-13-20 Tonight on Gotmead Live at 9PM ET, it’s Fall (at least on the calendar, lol) and our minds are on cysers. Crisp fall evenings, cool temps, and a nice cyser, maybe around the fire with friends. What could be better?

Cysers, mead made with apples or apple juice, are a popular mead style, and one that is getting more popular. We decided (really, it was Kevin’s idea) that this time of year was great for talking about them, since the apple crop is coming in. And we thought getting the gold medal winners in cysers from 3 competitions, the Valhalla: The Meading of  Life, Valkyrie’s Horn, and the Mazer Cup would be a great way to do it.

So, we got Kevin Meintsma (who proposed the idea literally a few days before discovering he had won the gold at the Mazer Cup), Adam Bystrom who took gold at Valhalla, and Allan Martin, who took the gold in the Valkyrie’s Horn.

These folks are talented meadmakers, and all have been on the show before. But we’ll be talking cysers for the most part tonight. Drop us questions in the live chat on Slack, or send them on DM on social, and we’ll get them answered! 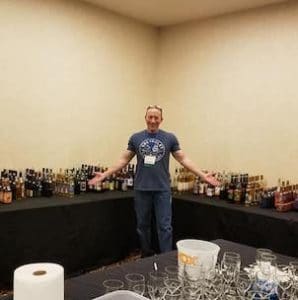 Allen Martin was born and raised in Massachusetts, but he’s been living in Phoenix, AZ for last 28 years.

Allen served in the military for 11 years,  including in the first Gulf War. He’s married to a beer brewing beauty and has a grown son.

His first introduction to mead was at a bottle share where Carvin Wilson was in attendance about 4 years ago. He’s been making it ever since. He’s a huge fan of session traditionals.

Here he’s in the ‘mead room’ at the Mazer Cup, where the meads to be judged are sorted and staged. He calls it ‘Mead Heaven’. We agree! 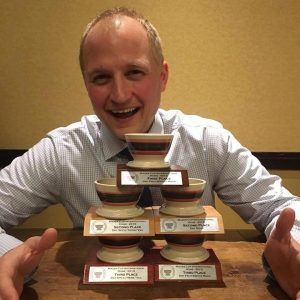 Minnesota-native Adam Bystrom is a mead maker who’s currently in first place in the 2020 AMMA Mead Maker of the Year series. Last year he won 5 medals at the Mazer Cup International, including the Heavy Medal Award (and was a significant part of the storming of MCI last year).

He’s also won Best of Show at the last two Minnesota State Fair Homebrew Competition. And, he’s only been making mead for about two and a half years. In that time, he’s made 80 batches. When he’s not fine tuning his libations, Adam enjoys spending time with his family, wife Danielle and two year old son Truman, in St. Louis Park, Minnesota. 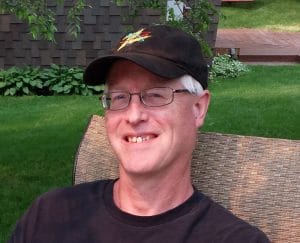 Kevin is a host of GotMead Live right now, he’s up in Minnesota, near Minneapolis. In 2017 he came back to mead after blowing through all the beer and cider styles. His 3rd mead was a pyment which took first place at the Minnesota State Fair (to his surprise). His 4th mead was a cyser made in the fall from local apples he got via the Primary Fermenters club. During the Minnesota Homebrewer’s Association annual holiday party in December, Matt Weide tasted the cyser and declared it better than his! So Kevin entered it in the AHA 2018 Nationals where it got a gold in the first round, and a 2nd in the final round, totally shocking Kevin.

So, in 2019, he found the Mazer Cup. He attended and was shocked to take two medals and a should out from Josh Mahoney, one is his local mead heroes. He also got involved with a local group of mead makers and then went on to help found the Valkyries Horn Mead Competition, which was held for the first time in September 2019.

Kevin has focused on process and technique, more than ingredients or yeast. Nearly all his medals and best of shows he’s gotten have used ‘generic’ ingredients and prosaic yeast choices, which he did deliberately, due to a tight budget. He wanted a good grasp of technique so he can do justice to the many honey varietals that are available now.

Come on in and have a listen!

Join us on the live chat and don’t be afraid to call in if you want to!

This player will show the most recent show, and when we’re live, will play the live feed. If you are calling in, please turn off the player sound, so we don’t get feedback.[break] [break]Click here to see a playable list of all our episodes!

If you want to ask your mead making questions, you can call us at 803-443-MEAD (6323) or send us a question via email, or via Twitter @GotmeadNow and we’ll tackle it online! 9PM EDT/6PM PDT Join us on live chat during the show Bring your questions and your mead, and let’s talk mead! You can call us at 803-443-MEAD (6323), or Skype us at meadwench (please friend me first and say you’re a listener, I get tons of Skype spam), or tweet to @gotmeadnow.

Got an event you’d like us to mention on GotMead Live? Send us an email at gotmeadlive@gotmead.com and tell us about it!

Follow me
Vicky Rowe
Owner at Gotmead.com and Craft Beverage Marketing
Vicky Rowe has been active as a promoter and supporter of the mead industry since the mid-90's with Gotmead.com, and is totally serious about seeing the mead industry take its rightful place as a popular craft beverage on the world recreational drinking stage.

She is also an experienced marketing coach and consultant who has recently decided to focus her marketing expertise exclusively on the craft beverage market to help meaderies, cideries, breweries and distilleries expand their business and get more customers while doing what they love.