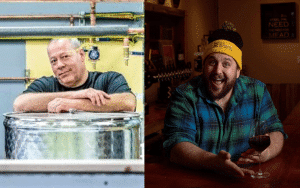 2-25-20 Tonight at 9PM ET GotMead Live will be talking with Roger Wanner and Joe Abruzzo, owners of W A Meadwerks on Long Island in New York. These guys are truly passionate about their mead, and managed to open a meadery in a place that’s pretty darn expensive, and do it on a shoestring.

Roger will be speaking at MeadCon this year on how they managed to open their meadery with very little up front. W A Meadwerks started in Roger’s basement in West Islip after being lucky enough to try commercial meads from Schramms, Superstition and Melovino. They made a few good batches and they dumped a few at the beginning. After the bad batches, they started upgrading Roger’s basement. They started to enter some of their meads in local competitions. They won some awards and received some great feed back.

At that point they had the insane idea to open a commercial meadery, the idea being that one did not exist on Long Island. They opened their doors in Lindenhurst, Long Island, NY in September of 2018. After being open a little under a year they decided to try and put together an all mead festival on Long Island with the help of their village. The first year of the festival had 6 commercial meaderies, mead sent to them from all over the country along with more than 25 home made meads. The event was wildly successful and will be held again this year. 18 months in and they are have already out grown their production in their current space. On Feb 19th they signed the lease to a second production space and look forward to their growth in 2020.

Roger started making beer with kits in his basement, and discovered mead as he dug deeper into craft brewing. He fell in love with it, and with the science of meadmaking.

Joe has been in the Long Island bar and restaurant industry for the last 20 years. He also worked in one of the best craft beer bars on Long Island for 7 years and spent a year and a half at a brewery. He’s been into craft beer for about 10 years.

Join us on the live chat and don’t be afraid to call in if you want to!

This player will show the most recent show, and when we’re live, will play the live feed. If you are calling in, please turn off the player sound, so we don’t get feedback. Click here to see a playable list of all our episodes!

If you want to ask your mead making questions, you can call us at 803-443-MEAD (6323) or send us a question via email, or via Twitter @GotmeadNow and we’ll tackle it online! 9PM EDT/6PM PDT Join us on live chat during the show Bring your questions and your mead, and let’s talk mead! You can call us at 803-443-MEAD (6323), or Skype us at meadwench (please friend me first and say you’re a listener, I get tons of Skype spam), or tweet to @gotmeadnow.

Got an event you’d like us to mention on GotMead Live? Send us an email at gotmeadlive@gotmead.com and tell us about it!

Follow me
Vicky Rowe
Owner at Gotmead.com and Craft Beverage Marketing
Vicky Rowe has been active as a promoter and supporter of the mead industry since the mid-90's with Gotmead.com, and is totally serious about seeing the mead industry take its rightful place as a popular craft beverage on the world recreational drinking stage.

She is also an experienced marketing coach and consultant who has recently decided to focus her marketing expertise exclusively on the craft beverage market to help meaderies, cideries, breweries and distilleries expand their business and get more customers while doing what they love.

Follow me
Latest posts by Vicky Rowe (see all)